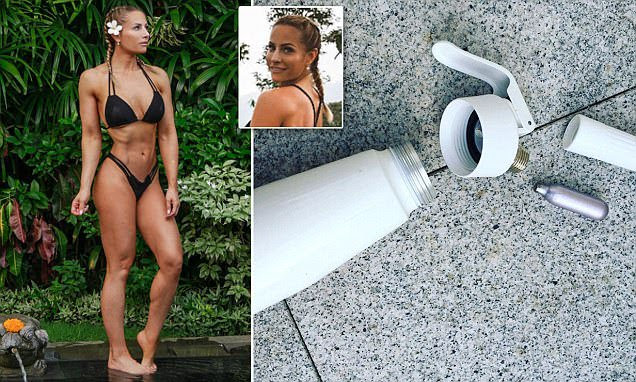 33 year old Rebecca Burger, an Instagram model, health guru and blogger from France has been killed by an exploding whipped cream dispenser. The device apparently exploded in her hand and hit her in the chest, sending her into cardiac arrest. She was transported to hospital but tragically died the next day.

Rebeccas Instagram page has over 200,000 followers. Her family have since posted on her Instagram to warn people of the dangers of these lethal whipped cream capsules.

Apparently there are tens of thousands of these containers still in circulation and they want to alert the public just how dangerous they are.

Prosecutors are investigating the device and its manufacture.

Paramedics arrived at the scene of the incident but were sadly unable to revive her. She remained unconscious and was unable to be revived at the hospital, where she died the next day.

Rebecca became famous by sharing workout tips, photos and videos on Instagram. She recently created her very first Vlog on a recent trip to Bali, on June 10th.

The manufacturer of the container came forward to report that that particular item had been recalled by Ard’time and subsequently removed from the market following a previous accident.

In February 2013, one person came forward to detail their injuries. Six broken ribs and a broken sternum. Hospital staff explained that indeed, had the blast been facing the heart, death would have been the result.

The French ministry made a statement in 2014 regarding the containers after several domestic accidents were reported. The dangers outlined were –

Explosions causing a high speed burst that can result in injuries to the hands and face.

Perhaps there should have been a more serious warning. Unfortunately it is too little, too late for Rebecca. Condolences to her family at this sad time.

Please share wherever possible and lets warn others of the dangers.

Here is a pic of one of the devices that Rebeccas family have shared on her Instagram, similar to the one that killed her at her home on June 18th.

The device was sealed and is gas-powered.

Health and fitness firm Women’s Best, who Rebecca modelled for, posted this tribute online. “Rebecca was a great athlete and a kind and generous person with whom to work. Pray for her to rest in peace and for her family to remain strong. We will always be proud of you Rebecca”