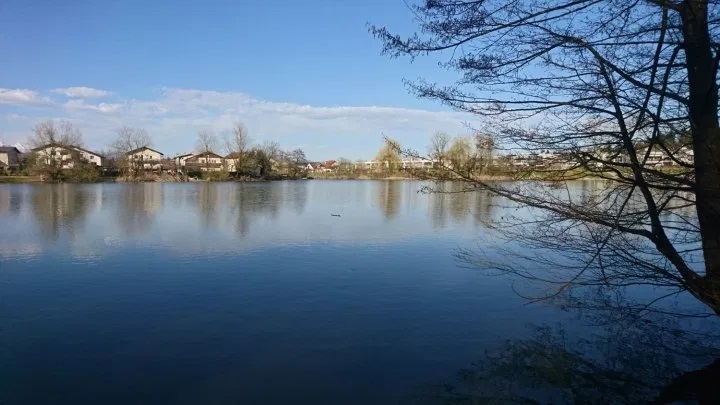 Travellers from all over the globe visit Ljubljana to take a break, stroll through the historic old town, grab an artisanal ice cream at one of Ljubljana’s many cafes and window shop in its many boutiques. Although Ljubljana has a lot to offer in terms of city life, culture, museums and history, it is sometimes nice to get out of the city and enjoy a day out in the pristine Slovenian nature.

Luckily, since both Ljubljana and Slovenia are quite small, many natural gems can be easily reached by a short drive or even by public transport. As a lifetime local of Ljubljana, the following 5 are what I consider to be the absolute best daytrips from Ljubljana, and they’re all accessible via public transport:

Ljubljana was built entirely on marsh ground and a large part of it is now a protected natural area, the Ljubljansko barje nature park. The park is crisscrossed with countless sign posted walking and biking trails along the Iška river and is particularly beautiful in the spring or summer, when all the flowers are in bloom. The signs along the trails tell you about various historical facts, as the area is an archaeological paradise. They found the world’s oldest wheel with an axle buried there, which is estimated to be about 5000 years old, and the remains of the Bronze Age pile dwellings, which made it on the UNESCO World Heritage list.

Since the whole area is entirely flat and the trails are well-maintained, it makes for a very easy walk and the perfect day out with little kids, which can be as long or as short as you like. The marshes are also incredibly biodiverse, as they are home to more butterfly species than the whole British Isles, as well as birds, plant life and many endangered lifeforms.

The starting points of Ljubljana marshes walking trails can be reached by the city bus no. 19 and I recommend stopping at the Church of St. Michael in Črna vas on the way. It was built by the famous Slovenian architect, Jožef Plečnik, and its unique bell tower is definitely a sight to see.

Another, separate part of the Ljubljana marshes is Iški vintgar, a gorge formed by the beautiful blue-green Iška river. The Iška gorge is scenic gorge full of interesting rock formations and the walk through it will take you about an hour, depending on which bank of the river you choose. The trail runs through the forest, is rather easy to walk and navigate, and there’s an old World War 2 era field hospital located a bit higher on the right bank, but the path up there is quite steep.

Iška gorge can be reached by taking the city bus no. 19 in the opposite direction to Ljubljana marshes. From there you can also hike up to Krvava peč, Rakitna or Krim, popular local hiking destinations of varying difficulty.

The springs of Ljubljanica river

The next daytrip option is in Vrhnika, a town a bit outside Ljubljana. There are in fact 3 major springs of Ljubljanica, the river that runs through Ljubljana, and all of them can be found in the vicinity of Vrhnika. The Močilnik spring is located in Vrhnika and is supposed to be the site where the legendary Greek Jason and the Argonauts landed and went ashore during their mythical quest for the Golden Fleece.

There are also several small springs in Retovje valley, which is located in Verd, a small village next to Vrhnika, as well as some springs in Bistra, another village further down the road. The Slovenian Technical Musuem is also located in a Bistra, in a former monastery building, and has a great collection of old time cars from the Yugoslavian president Josip Broz Tito.

Vrhnika and its spring of Ljubljanica river can be reached by taking the local bus to Vrhnika and walking from there, but it is easiest to visit by car, as you can drive directly to all the springs.

A bit further from Bistra is a small village named Borovnica, which literally translated into a blueberry. Besides the remains of an old Roman aqueduct, Borovnica is also the gateway to a small, gorge named Pekel (Hell). Contrary to what you might imagine, the Hell gorge hides 5 beautiful waterfalls, which makes it perfect for a summer daytrip. The trail through the gorge is well-marked, takes about 2 hours round trip and is a bit strenuous. The 5th waterfall is located 450 meters above sea level, so the wood path gets a bit steep and narrow at times. I recommend good walking shoes, insect repllent and lots of water, but if you are reasonably fit you should be alright.

Borovnica is about 20 minutes away from Ljubljana by car or by train. From the train station you’ll need to walk a few kilometres to the entrance into Pekel, where you’ll see the Pekel inn, which serves great grilled trouts.

This last one isn’t technically outside Ljubljana, but it is further out from the city centre and not usually on the tourist radar. The pond in Koseze, a Ljubljana suburb, is a medium sized artificial pond where the locals like to hang out during any season. In the summer it is a nice place for a relaxing walk through the surrounding nature, or to chill with a snack at the wooden pier platforms, and during winter it becomes an ice rink. On a clear, sunny day you’ll get a gorgeous view of the mountains around Ljubljana and there are always lots of birds: swans, ducks and even endangered marsh species.

The Koseze pond can be easily reached on foot by following the Path of Remembrance and Comradeship, or by taking the city bus no. 5 or 22.

As you can see, Ljubljana is a lot more than the iconic city centre, and it would be a shame if you didn’t visit at least one of these nature sights during your stay there. Slovenian nature in general is extremely diverse, due to all the different geographical terrains. From rolling hills to Karst fields, marshlands, tall alpine mountains and even a bit of seaside, so it is well worth exploring. Slovenia also places a huge emphasis on green, sustainable tourism and local products, so go ahead and put it on your travel list!