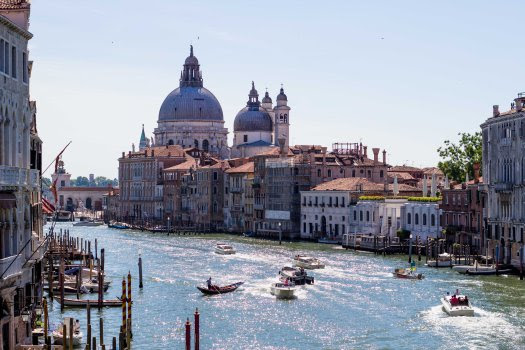 2:00 AM and my eyes sprang open. The alarm to the right of me having its usual fit. My body knew before my mind could register, in a matter of hours, Venice would be under my feet. Up, showered, dressed and out the door. I have always wondered what ‘The Floating City’ would be like. Never did I imagine my first time there would grant me less than 24 hours. But still, I’m not complaining.

It’s dark but still hot. A feeling that after a month in Central Europe I still haven’t adjusted to. We are stood waiting in anticipation for the sound of our FlixBus pulling into the station. Around us are other exhausted travelers, effortlessly trying not to seem so tired.

3:40 AM, the atmosphere in the air suspended between night and day. The streets quiet and desolate. For a city composed of mostly students, Ljubljana is peacefully creepy. As expected as soon as the coach comes into sight the masses of people lose all ability to stay in line. Forming a wall of emotionless faces and bodies. One by one we step on, bags hoisted up into the overhead compartments. Shoes off. Headphones out. Seats extended backward, sleep.

8:00 AM, we have arrived. The time spent attempting to sleep was the most uncomfortable traveling experience I’ve had to date. The twisting and turning of the coach as it wrapped around the steep roads of the mountains as we entered Italy, granting no smooth ride. As we stepped off, I was met with the overwhelming sensation of satisfaction.

Close your eyes. Take a deep breath. Taste the salt in the air. We are here.

Now for someone who has only ever seen Venice in movies or in picture’s, I very quickly realised that it is a lot bigger than I imagined. I had lost all sense of direction. According to the unreliable reading’s on my google maps, we were somewhere on the outskirts of the island. A place named Tronchetto. Sort of detached but also attached to the main body of Venice. We followed the flow of people and the noise of dragging suitcases to a small tram/train contraption. This we assume is the answer to getting further inland, somewhere more appealing than the transport drop off point.

3, 2, 1. Now I can say we have arrived. Out the doors, down the stairs, across the road and we have movement. The canals, the boats, the water rocking back and forth up the side of the street walls. This was the start of our adventure.

First thing’s first, plan a route to the Lorenzo Quinn’s art installation. A pair of giant clay white hand’s rising up from Venice’s Grand Canal, supporting an edge of the historic Ca’Sagredo Hotel. That’s what we are after.

I’m not one for art but this piece intrigued me massively. Lorenzo Quinn’s concept is said to be one that symbolizes these hands as the very tool’s that can both destroy and save the world we live in. Naming this beautifully constructed installation ‘Support’ as it represents what we can do as human’s to stop the issue’s climate change poses. In my eyes, this happens to be such an appropriate art piece for the city of Venice, as it is quite literally sinking as time goes on. The shape of these hands so life like, so real, said to be designed based on the hands of his children, promoting innocents and the power the next generation has. Now, given all that you know, you really do have to take my word for it, the sheer sight of these hands is utterly breathtaking. The message is so strong and so relevant to all of us, it’s something that shook me down to my core just looking at it. Reminding me of a truth I want to forget. The truth that eventually places and cities like this one will no longer be around, forcing the world to loose out on so much culture and beauty. I recommend if you are visiting Venicebefore November 26th, 2017 go and check this installation out before it’s gone, see the marvel for yourselves.

The rest of the day was pretty much filled with walking around the ENTIRE island from start to end in a complete caffeine overdosed haze. Exhausted didn’t even cut it. We went through what felt like every single side street and small passage Venice had to offer. Passing canals filled with Gondolas and taxi boats. The streets stretched and curled, looking both beautiful and confusing. There were no cars, which was expected, allowing it to be just a little more relaxing. Knowing I didn’t have to wait at unpredictable crossings, watch out for reckless drivers or even listen to countless engines roar, made the experience all that more enjoyable.

Hour by hour, minute by minute the day was slowly escaping. We wondered and wondered around the pastel coloured buildings. Venturing in and out of galleries and art exhibitions. I say we, this was mostly Danielle. As an art student, she is kind of obligated to at least explore some of the art Venice has to offer. There were some interesting pieces (She recommend’s the Peggy Guggenheim), as well as some that really wasn’t.

After all this exploring and being tourists, we were both drained physically and mentally. As I mentioned before Venice is surprisingly a huge place to try and explore in under 16 hours. We were no way equipped with enough food or caffeine to carry on any further, forcing us to set up a makeshift napping station on the furthest point of the island, in a place called Park Parco. Here we found not just a place to rest our heads, but countless beautiful sculptures of art, helping us ease the guilt of sleeping.

Lay down. Stretch. Breathe in and out.

After this very tactical and needed nap. We both decided it was about time to pack up and head for the thing most people visit Italy for, THE INSANELY TASTY FOOD. The night started to close in and daylight struggled hopelessly to stay, the once pastel coloured streets became romantically lit and surprisingly familiar. Yellow beams illuminating names.

All streets smelling mouth-watering and appetizing. We knew our destination. After previously speaking with someone we know who has been here, we were encouraged…no convinced to try the restaurant they ate at. A rustic place by the name Da Mamo. Service here was second to none, very attentive and engaging, whilst being both polite and entertaining. Be warned though the place isn’t the biggest, although it is by far the busiest I’ve been to in a long time. It’s open 12-3pm for lunch and then again 7-10pm for dinner. I suggest you make a reservation if you are interested in going as when I say it was busy, I mean busy. As waited for it to re-opened there was a queue forming 15 people deep. All eager and all starving. Once in and seated every table in the place was full within the first 10 minutes, and rightly so. The food was delicious and the price definitely expected for a city like Venice. All in all well worth the money.

As our time here draws to an end, we roam these streets like we are locals. The past 16 hours has shown us so much, it’s upsetting to have to leave. We drag our feet slowly through the crowds, prolonging the inevitable departure. Tears in our eyes, memories lingering, the sun slowly saying goodbye as it vanishes over the buildings ahead. This is the Venice I’ll remember. The city that offers so much beauty, so much art, so much culture. Even the sky a now perfect tinted colour, offers more grace and elegance than I’ve ever witnessed, burying its way into my soul.

Phenomenal, it really is.

Venice doesn’t offer many activities to indulge in and the prices for things can be a little far fetched, but if you’re like me and completely satisfied with a destination offering nothing more than its mystery and beauty, then I’m sure you’ll be fine.

– Be prepared to walk MILES.- Pack your own food and drink or go to the island’s Spar store (saves you time and money).

– Visit the art installations and galleries (there’s more than enough).

– Stop a couple of times in the day and take in the view.

– Obviously, reserve a place at De Mamo (you won’t regret it).

– Explore, get lost, laugh and have fun.