Swedish Model gets Rape Threats for being Hairy! 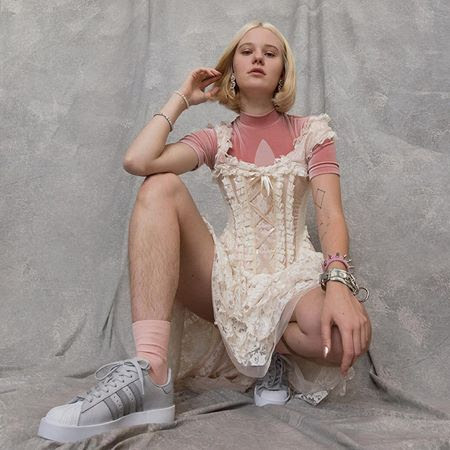 Swedish artist, model, photographer and feminist Arvida Byström has been receiving rape threats since she uploaded a photo from an Adidas advert on her Instagram page.

She has grown out her leg hair and poses naturally, revealing her bare hairy leg for all the world to see.

Since uploading the pic to her Instagram, she has received a number of rape threats. She took to Instagram to tackle the abusive comments.

“Me being such an abled, white, cis body with its only nonconforming feature being a lil leg hair,” she wrote, posting the image again.

“Literally I’ve been getting rape threats in my DM inbox.

“I can’t even begin to imagine what it’s like to not posses [sic] all these privileges and try to exist in the world.”

“Sending love and try to remember that not everybody has the same experiences being a person,” she added.

Byström got into photography at a young age and began a series of selfies depicting to “know the truth about how the world sees you”. She later found her tribe online – a community of women who question feminity and gender standards, using a so-called “girly” aesthetic and “girly coded stuff”. She did a series on period-related stuff called There Will Be Blood, published in Vice, on 17 May 2012.

Back then she also began sporting the classic hairy legs and armpits as part of her campaign for gender equality and feminism.

She grew up in Stockholm, but moved to London and began modelling and taking part in various cultural shows, including a play for young artists who were somewhat misrepresented in the art world. She took part in the show called Girls At Night On The Internet.

As a member of the female collective The Ardorous, Byström presented some of her photographs in Babe – a book published in May 2015, including the work of 30 other female artists.

She took part in creating an online culture that aims at ‘reinventing body norms’ and which is all about self-empowerment.

One particular show she took part in was Selfie Stick Aerobics –

Selfie Stick Aerobics. It is a tutorial that shows how to take better selfies and which aims at making participants feel beautiful by accepting their bodies as they are. In October 2015, Byström and artist Maja Malou Lyse published a video about this performance on YouTube.

First on DEEP, we're gonna get warmed up with some #selfiestickaerobics by @arvidabystrom and Maja Malou Lyse pic.twitter.com/T5lXthyMSs

Byström explores self-identity as a queer woman and questions sexualized women’s bodies. She decided to put together a book with the artist Molly Soda about Instagram censorship, called Pics or It Didn’t Happen: Images Banned From Instagram. The book was released in March 2017 and showcases mostly pictures of women’s bodies that Instagram has removed. She is regularly seen on Instagram posing with hairy armpits and also showing off her cellulite by posing with a dimpled cherry. Check out her Instagram profile here:

A spokesperson for Adidas said that Byström was “an artist, photographer, model and cyber sensation, known for her photography, which questions femininity and gender standards using so-called ‘girly’ aesthetics”.

In a statement, Adidas said it’s “honoured to work with creators like Arvida for their creativity, diversity and unique ideas.”

The company says it wanted to provide its collaborators with “a platform for positivity, discussion and change”.

She has been getting mostly supportive messages of praise from the public and of course her followers.

I say good on her! What are your thoughts? Let me know in the comments below. I will not be publishing any offensive comments. Thanks for reading.