Cycling on Water with the Hydrofoil Waterbike 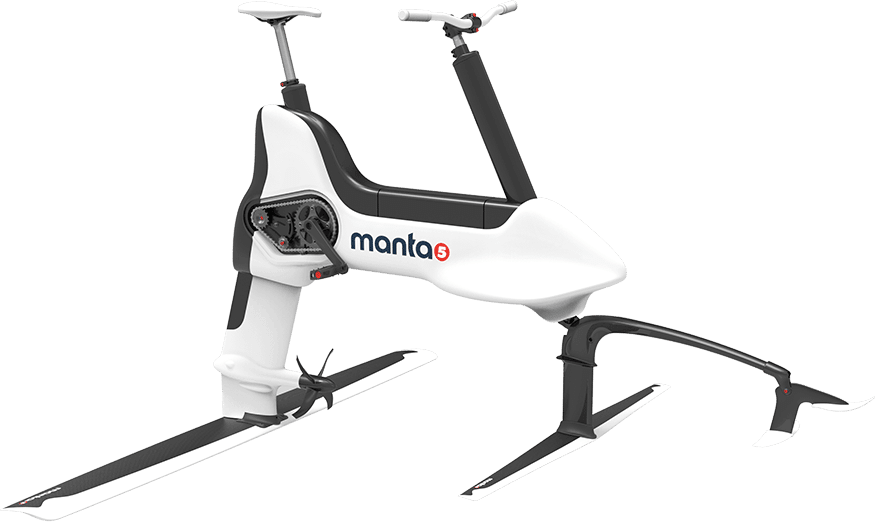 We  have seen the floating water bikes but this is a whole new level! How fun does that look?

New Zealand man Guy Howard-Willis from Hamilton, the founder of outdoor equipment company Torpedo7 has designed a bike to make it possible to actually cycle on the water.

How cool will it be to be able to rock onto the lake on your bike?!

Heres what he says about his dream project as it is finally becoming a reality – “I’ve cycled all my life. I love road cycling and mountain biking, I love watersports and swimming, so putting the two together wasn’t particularly hard to do”.

The hard part was getting someone to design and produce it.

The Manta5 has an aluminum frame, two carbon fiber hydrofoils that provide lift, and a 400-watt motor that augments the rider’s pedalling power to turn the propeller. Although it has no actual hull, it does have buoyancy modules that keep it afloat when stopped. Additionally, unlike the case with some hobbyist hydrofoil bikes, it’s possible to get back on and get it planing again, if you should dismount while out on the water.

It weighs around 20kg and can be assembled and disassembled for easy transport.
Top speed is around 20km/ph and the battery lasts for up to an hour. He is aiming to double the speed and his dream is to have it as an Olympic sport one day. Bring it on, I say!
It was introduced onto the market last weekend at the Big Boys Toys Expo in NZ.
They have a huge amount of pre-orders even though it hasn’t been fully released yet.
Here is a bit about the project and what he had to say –

For the first two years, no-one except the nearest and dearest knew about the operation.

“I didn’t want people to put me off, whether it be family or friends,” Howard-Willis said. “People can put you off if they don’t understand the idea. They may think it won’t work.

“Also, if it didn’t work, then no one would know.”

At the start of testing, they used the Wintec swimming pool in Tauranga at night.

Then they moved it to Cambridge.

“We often go to Karapiro, as that is a good testing place for us.

“Even though we try to do it in secret ,we went to Karapiro and the rowing eight were out there and [their test rider] got on and rode straight past them. It drew their attention and a couple had a go and really liked them.”

“It’s very much like a plane. The propellers are on the front of the wing, so same principal, really.”

He hasn’t revealed how much the project has cost, but im sure it will pay for itself as it is such an exciting concept.

People will go mad for it!

I would love to try this out, so fingers crossed they will be renting these near me.

They can be used on both salt and fresh water.

Check out the bike here

What do you guys think? Next big thing in sport?!!!!