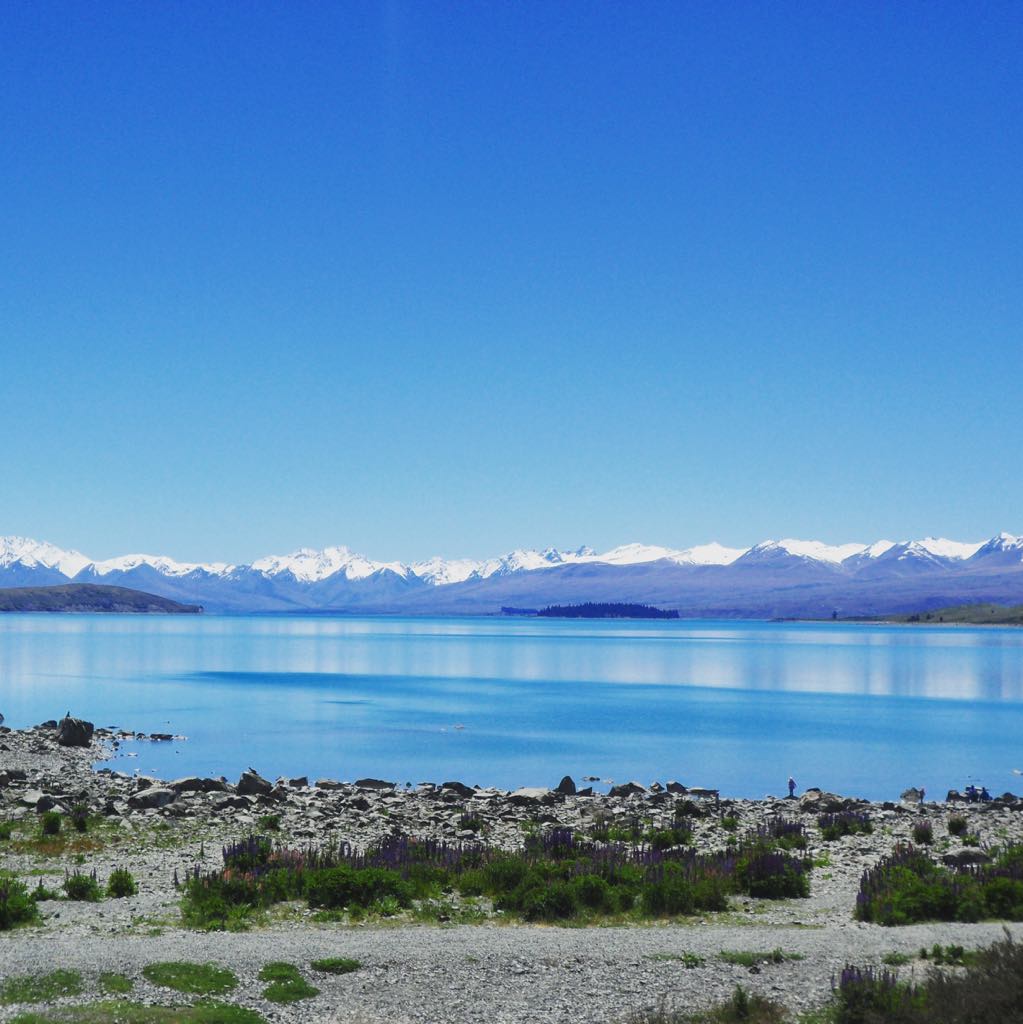 I wasn’t sure what to expect on arrival, but Lake Tekapo‘s stunning scenery completely blew me away! I had been living in beautiful Mount Maunganui, North Island, NZ when I got a job offer in a souvenir shop in the remote ski village. I arrived on a flight in to Christchurch city and spent a night there, then made my way on the 3 hour bus journey next morning.

It was on the bus that I first realized what everyone was talking about.The jaw-dropping scenery of the South Island did not disappoint. On my travels through the north island, most people gushed about the beauty of the south after being on trips there. I didn’t know why because I was in love with the north island and its gorgeous beaches and rainforest-like beauty. The diverse difference between north and south became apparent immediately. Both have their own precious perfections but this was really something extra special. The rugged mountainous terrain was a sight to behold.

I was stuck to the window of the bus practically the whole way there. The trail of snow capped mountains seemed to never end! I had never seen such amazing scenery in my life. I was completely in awe. There were hundreds and thousands of acres of lush green farmland. Patchwork fields with lots and lots of sheep. I now understood how there are more sheep than people in NZ!

When the bus stopped at Tekapo I felt like I had stepped into another world. I got off the bus and just stood there staring at the humongous snow-capped mountain in front of me. I had never seen anything like it. It was so peaceful right there and then. All I could hear was the wind, like a scene from an old western movie. I snapped out of it and made my way to the backpackers.

It was pretty cold but remarkably they had electric blankets on the bed! I had never seen that in a backpackers before and thought how cosy it would be to be all cuddled up and warm there that night. I bought a few groceries and went to the souvenir shop, Alpine Haven where I would be working to introduce myself. It was full of warm NZ wool jumpers and typical souvenirs. I was welcomed warmly by the manager and knew it would be a grand place to work. The view from the shop is a must-see!

I wouldn’t start for a couple of days so I went exploring the area. I wasn’t sure how well or how long I would last in the tiny village as all there was were a few shops, mainly souvenirs and a few restaurants. I discovered there was an Alpine Springs hot pools and also a star gazing tour. Lake Tekapo is one of the best places in the Southern Hemisphere to see the stars. They have a proper observatory at the top of Mount John, not far by bus. You need to take the tour bus at night as it has a light restriction due to the star gazing. You can go on the tour and watch the planets through giant telescopes. Pretty cool!

I decided I was going to walk up to the observatory as it was a good hike to do so the next day I made my way up on foot. There is a proper walkway so it wasn’t hard to follow. What an amazing walk. Lake Tekapo’s stunning scenery just got even better from up there! Check out the photos.

It was a good day to be up there apparently, as the lake looked like a mirror so I grabbed a couple of tourists to take a photo of me at the top. Definitely worth the walk, it only took an hour or so.

When you get back down from the summit, it is worth checking out the famous Japanese restaurant, Kohan. It is best to book as it is extremely popular and for a good reason. Treat yourself to a bento box or try the teriyaki chicken rolls. If you haven’t tried Japanese food, you should! Apparently the restaurant is well known by the Japanese who flock there when they arrive on holidays so that is a good sign! If you prefer to take away your meal that’s also an option so grab some sushi on the go if you’re keen. The staff are super friendly and you get a free miso soup when you dine in.

The most famous landmark in Tekapo is the Church of the Good Shepherd which is a tiny stone built church where the view is most picturesque. It is as though they found the best view in Tekapo and built it there for that reason. There are so many photos of the church bathed in stars at night on postcards to buy. There is something truly magical about it.

If you are lucky, you might catch an Aurora Borealis , as they are quite common in the area. Another reason it is perfect for star gazing. I was lucky enough to see one, as they inform you a few days beforehand if there is one due, but not always guaranteed. The photos never do it justice.

The story of Tekapo is that of the Maori’s who discovered Tekapo and named it. The name Tekapo means ‘night blanket’ in Maori. Sleeping under the clear sky at night is a real sight to behold. Another famous story is that of James McKenzie, a legendary Scottish sheep rustler who was rumored as having ‘discovered’ Tekapo. He had been stealing herds of sheep and hiding them in the basin at Tekapo. They didn’t catch him for a long time, during which he had stolen hundreds or even thousands of sheep and herded them to Tekapo to hide them. Due to the fact that Tekapo is actually a basin hidden amongst the mountains, it was a perfect hiding spot. Eventually he was caught but made a legend after discovering Lake Tekapo. There is a monument of his sheep dog outside the church and he apparently spoke Gaeilge ( Gaelic ) as the Scots once spoke the Celtic tongue. The monuments honoring McKenzie are written in old Gaelic and there are many landmarks and roads named after him.

Lake Tekapo is situated in the middle of the South Island, New Zealand. It is half way between Christchurch and Queenstown. There is a ski field at Roundhill so it gets very busy during the winter season. With Lake Tekapo’s stunning scenery, it is easy to see why. The views from up there are truly beautiful. In fact, all around is just a photographers paradise. A lot of people get married in the Church of the Good Shepherd and many people flock to see Mount John’s Observatory. So many reasons to visit! It is also on route to Mount Cook, where the famous Edmund Hillary conquered. That is a whole other blog post so stay tuned for that!

If you like ice skating then you will love the skate rink at Tekapo Springs. It turns into a skate park during summer and in winter they also have a massive slide with donuts for kids and grown-ups alike. It is perfect for a family day out.

The weather is pretty much always good in summer, as Lake Tekapo has a micro-climate. Due to being in a basin, it gets the sun and is sheltered. On average, Lake Tekapo has 2180 sunshine hours (200 hours more than the New Zealand average) and 78 rain days producing 600 mm rainfall annually.

The stunning color of the lake is due to the tiny micro-particles from the glacier water which travels down from the glaciers and is embedded in the bottom of the lake. It is an aqua color which is unique to Tekapo. There is the option to swim, but only for the very brave! Definitely only in the summer months unless you are the Ice Man. I did it once as a dare and just about managed after chickening out a few times!

If you wish to swim, there is a well-kept secret called Lake Alexandrina, where the water is clear and warm so perfect for a dip and a lovely quiet place to chill. Don’t tell anyone though! We like to keep it that way. Another pretty spot for photos and only a short drive from the village.

In summer you will see purple and pink lapins everywhere as they grow in abundance naturally along the roads and lakeside. Pretty as a picture. During winter you will see the snow-capped mountains and have the chance to ski and ice skate. No matter what time of year you go, you will adore Lake Tekapo’s stunning scenery.

If you really want to go all out, you could take a helicopter ride over to Mount Cook or Franz Joseph and land on the glacier. The views are simply spectacular. They have an office in the Main Street.

I lived there for 3 years in the end! Lake Tekapo’s stunning scenery kept me there far longer than the intended few months. I will always have a place in my heart for Tekapo. You simply have to see it to believe it. If you happen to be traveling to New Zealand, it is an absolute must-see.

Have you been to Tekapo? Tell us what your favorite highlights were in the comments!