Places to Explore in Chicago at Night 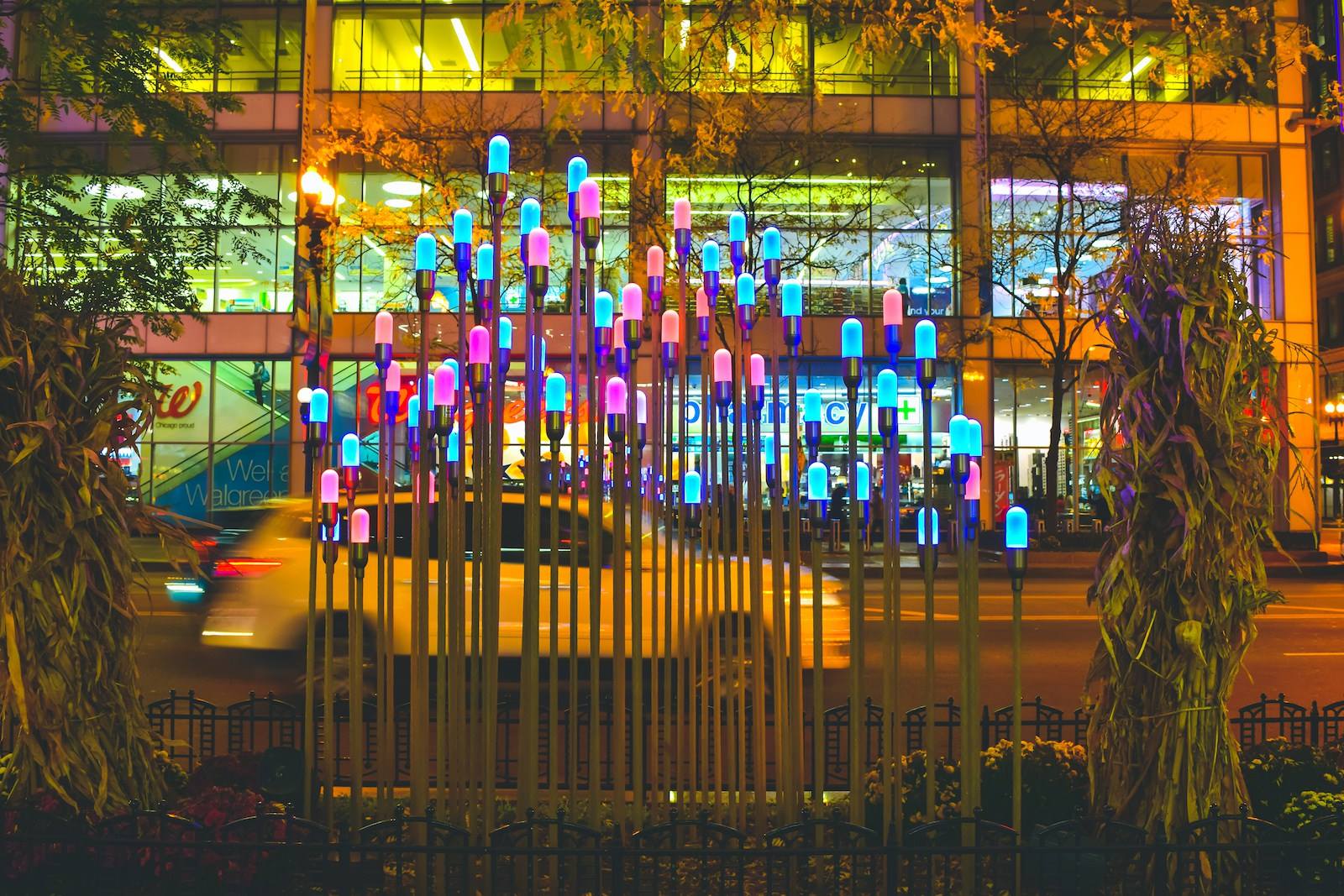 Much like New York, Chicago at night never sleeps and neither should you. During the day the city is full of activity, but at night it is serene and you get a better glimpse at the bright beacons Chicago has to offer.

If it isn’t too cold, I recommend you take advantage of the Chicago at night with its jaw-dropping cityscape. As impressive as the city is by day, it’s even more exquisite after hours. For a plan on what to see in Chicago by day, read on at A First Timers Weekend City Guide to Chicago.

Before you start your Chicago nighttime tour (Chi-ghttime), get the lay of the land and the city from one of the tallest buildings in Chicago, the John Hancock Center. On the 96th floor is The Signature Lounge, offering unobstructed 360° views of the city in every direction. Grab a mojito and push yourself to the edge by grabbing seats next to the floor to ceiling windows surrounding the bar and lounge area facing Lake Michigan, Downtown Chicago, or Uptown Chicago—the choice is yours. If you get hungry, head down to the 95th Floor for dinner at The Signature Room. Be sure to book in advance if you are looking to grab dinner!

You’ve already gotten a sneak peak from The Signature Lounge at 96th, but getting enwrapped in the city’s hundreds of colorful lights is a completely different experience. Walk across North Michigan Avenues Bridge and surround yourself with the lights and glamour of Chicago River’s architecture. It’s crazy to think that just a few years ago, the River was a sewage channel for industrial shipping. Today, it is one of Chicago’s star attractions.

At the far left, on the Chicago River, stands Trump Hotel & Tower. Originally, Trump wanted to make this building the tallest one in the US, but he eventually scaled back creating the lit up blue and yellow building you see today. To the right of the Trump building stands the Wrigley, with the tips of its clock tower painted in neon pink. It is one of Chicago’s earliest icons and was built in the early 1920s by the Wrigley Company.

There were a lot of things about the skyline in Chicago at night and its modern architecture that reminded me of outer space. The way the buildings subtly lit up in different colors complementing the orange tint that surrounded the city, it seemed surreal. The round spaceship like building below on the right is Marina City. It was the original inception city, a city within a city. The twin tower’s iconic corncob shapes appeared on everything from classic airline posters to cover art.

Cross over North Michigan Avenue’s bridge and you’ll find yourself in front of The Chicago Theatre. A French Baroque-style theatre that showcases national music and comedy acts, kind of like a mini-Broadway. The Chicago Theatre sign is probably is iconic and marquee, it requires no introduction. The reason why many associate Chicago, or the heart of Chicago with this theatre, is the marquee, which bears the municipal logo behind the words CHICAGO.

From here, keep walking down the Magnificent Mile, Chicago’s equivalent of Fifth Avenue, on Michigan Avenue. Here you’ll find more signs, similar to the Chicago Theatre one but not as big and flashy. Interestingly enough, any flashy sign you will see in Chicago at night is “Powered by” an advertiser. For example, the Oriental’s sign is Powered byFord, while the Chicago Theatre is Powered by Chase. The whole mile stretches from the Chicago River to Oak Street, but don’t walk all the way down because we will be making a detour at Millennium Park after hours.

Cross over into State Street and you’ll occasionally pass by some interesting architectural installations. My favorite is Lightscape, a multi-sensory experience that displays light bulbs shooting out of the ground with ever-changing vivid colors that were choreographed to music. It’s more visible in  Chicago at night than it is by day. You will find Lightscape located around 18 planters in Chicago, each with dozens of low-energy LED lights between Lake and Van Buren Street. The lights recall native prairie grasses, bringing a modern nature-like element to the city.

Head East to Millennium Park, for what will almost feel like a private tour of one of Chicago’s most visited attractions—The Bean, also referred to as Cloud Gate. The Bean at night is truly a sight for sore eyes and is open to the public from 6AM to 11PM. If you aren’t one for waking up early in the AM and catching a sunrise pic reflecting through the bean, catch what I like to call the “Chi-ghttime show.” The lights of the city skyline reflect back in the bean, lighting it up like some sort of a spaceship. And the crowds? Well there are none in Chicago at night, except for a 1 or 2 brave souls such as myself who are willing to brave the cold and see this magnificent art installation.

Walk down to Crown Fountain for the ultimate modern brainteaser. As you make your way across to Crown Fountain, you’ll notice the brightly lit Chicago skyline facing the park. The lit up colonial buildings remind me of the architecture that aligned Suzhou creek in Shanghai believe it or not!

Designed by Spanish artist, Jaume Plensa, Crown Fountain is another major addition to the already vast portfolio of public art collections Chicago boasts. The enormous towers project gigantic close-ups of digital faces on one side and colorful blocks on the other. During the day, these digital faces spit out water to ongoing parkgoers, which makes it a funny scene. The art installation portrays over 1,000 Chicagoans and has water coming out of their mouths as a symbol of life flowing out. Personally, I find the art installation to be even more spectacular at night. It’s a bright block of changing color lights shining through the darkness in the park. What can I say…these towers truly BLUE my mind…