Around Sydney Centre and Nearby Beaches 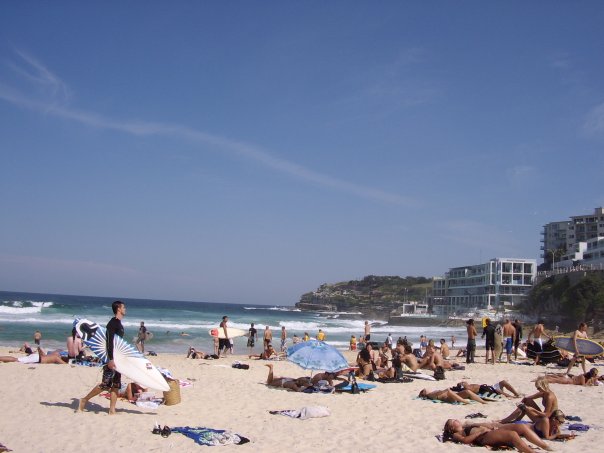 When I arrived in Sydney, I wasn’t sure what to expect. I had all my worldly belongings in a backpack and was ready to start a new life. We had just been backpacking around Thailand for a month so it was a big change for me. We had booked into a hostel in Bondi and I was glad to be heading to a beach to be honest! The hostel was right in the middle of two beaches – the famous Bondi beach and the quieter Tamarama, so ideally located. There was another fab beach just a short coastal walk away called Bronte which is a famous walkway and a great viewpoint.

The YHA Bondi Beach Club was the first proper hostel I ever stayed in and I was a bit apprehensive but I soon realized there was no need to worry. It was a perfect location with all the amenities and most importantly very clean. I loved it so much, I ended up living there for a couple of months! It was a really fun place and great for meeting fellow backpackers and new people.

Here is a view from the rooftop garden area, where we always met up for a drink in the evenings –

Bondi was a really trendy spot and always buzzing. Luckily, I arrived at the end of summer so I missed the crazy Christmas rush. I know Bondi gets extremely packed around Christmas New Year, since I went back again a few years later and it was pretty crazy. During autumn and winter, it is so much more relaxed and easy going. Apart from the stunning beaches, there are a plethora of restaurants to choose from so you are spoilt for choice when it comes to food.

On our first day we hit Bondi beach for a swim, as you do. The waves were very strong, as expected with a surf beach so it was not as easy to swim there. I was swept a good bit along without noticing and actually lost my friends on the beach. When I got out of the water I couldn’t see them among the hundreds of people! After around 10 minutes of pacing the beach, I spotted them and relaxed. Bondi is definitely a must-do attraction when in Sydney but it is a little dangerous, with the changing current as well as the possibility of jellyfish and sharks in the sea. I loved having the view of Bondi beach but rarely went swimming there. I had plans to learn surfing but never got around to it, however if you’re a surfer you will be in your element here! Tamarama was the next beach along and I preferred it as it was quieter so I usually headed there.

Bronte beach was my first choice if I had the time to walk there. It is a really scenic walkway so I recommend doing it if you’re in the area. Some great photo opportunities along the way so bring your camera. There are a few nice places there to eat or grab a coffee too so worth checking out.

Sydney city is a very modern metropolis with something for everyone. The shopping is great, there is the Paddy Market which is great for a bargain and if you’re looking for designer gear there are plenty of high end shops too. The Queen Victoria Mall is a beautiful late 19th century building so definitely worth a visit, the architecture is magnificent and there are some great higher end shops. Chinatown is another, pictured below.

There is a park called Tumbalong Park and it is great for kids, with play areas and fun things to see. There are some interesting sculptures and fountains around, as seen below.

After the park, there is the funfair, which is unmissable as it is huge, with a big wheel and carnival. I didn’t venture in, but it looks amazing. Check it out here for prices and details etc.

Darling Harbour is a good walk and there are lots of fancy restaurants to choose from as well as excellent views of the boats and dock. They have a replica of an ancient tall ship with sails and some sculptures at the end. Cockle Bay wharf, the Docks and Harbourside are all one long walk so plenty of sights to see along the way.

The sky tower is a great way to look down on Sydney from high above. I didn’t go up to the top but it is an amazing structure to behold. I got some photos as I walked by, but I had seen it from afar plenty of times, it is a dominant building as you can see. You can even have a fine dining experience with cocktails in the revolving restaurant on the top floor. For more info and prices check out the website here

Of course, no Sydney city trip could go without seeing the famous landmarks, the Harbor Bridge and Sydney Opera House. You will be no doubt wanting a selfie or family photo in front of those. We actually went there to watch the fireworks on New Years and it was really amazing. We watched from a park near the Harbor Bridge. It was overly packed but that was to be expected. We were lucky to get that near at all. We had been over to Manly on the ferry that day and were hoping to sneak into the best viewing spot after disembarking the evening ferry but no such luck. They redirected everyone away from the already crowded area, where people had been waiting since 8am in the morning or even the night before!

If you have small children with you, there are fireworks displays on earlier in the evening at 9pm to accommodate. It is a bit difficult with kids staying up that late, plus there are massive crowds on all public transport systems when leaving so probably better earlier with kids.

There are lots of great walks around Sydney and so much to see and do, you could just spend a whole day or 2 walking around, as I did. The Opera House is a must-see of course. We didn’t pay to go in and do a tour but just to see it from outside and afar was enough for us. It was all lit up at night in different colors and of course it is the main highlight of the city. You won’t see anything like it. There are operas and theatre shows on daily so if you’re into that, then you will be delighted to check out the interior and see a show.

I do recommend taking the ferry over to Manly as it is a beautiful place, totally different from the city and you can also swim there on the pristine beaches. Some lovely bars, restaurants and shops to check out and it is a perfect day trip. The ferry is cheap too as lots of people commute on the ferry so it won’t break the bank.

I ended up living in Sydney for 6 months. I got an apartment across the road from Bondi which was ideal and Bondi Junction was great for the shopping too if you’re looking for a big shopping centre. The nightlife there was bustling but make sure not to overdo it as they have strict policies on drinking. Don’t be surprised if you get refused after a few drinks into the night. Bar-hopping is one way to avoid it, or just make sure to pace yourself. Bondi beach area have a strict curfew of 12, where all bars and restaurants close and there is a drinking ban on the streets. Bondi junction however, rolls on through to 3am in the morning if you’re looking for a late night.

The city centre is a great place for nightlife, with the famous Kings Cross being the main hub. It is a strip of bars and nightclubs with a reputation for its late night crazy party lifestyle. It can be a bit rough though so be careful of drunken behavior and the odd fight or 2. If you are a female solo traveler I would steer clear just in case. There are lots of other great bars in town so you won’t be stuck for choices. The public transport system is great, there are regular buses and trains and you can buy passes to save money.

I absolutely loved living in Sydney and have been back twice since I left. I used to watch Bondi Rescue on tv just for the memories after I left! I would be chuffed to go back again and I am sure there are always new things to do and see in such a vast and multicultural city. Enjoy your trip and I hope this has helped you decide what to see and do while there. Those are in my opinion, the best attractions in Sydney 🙂