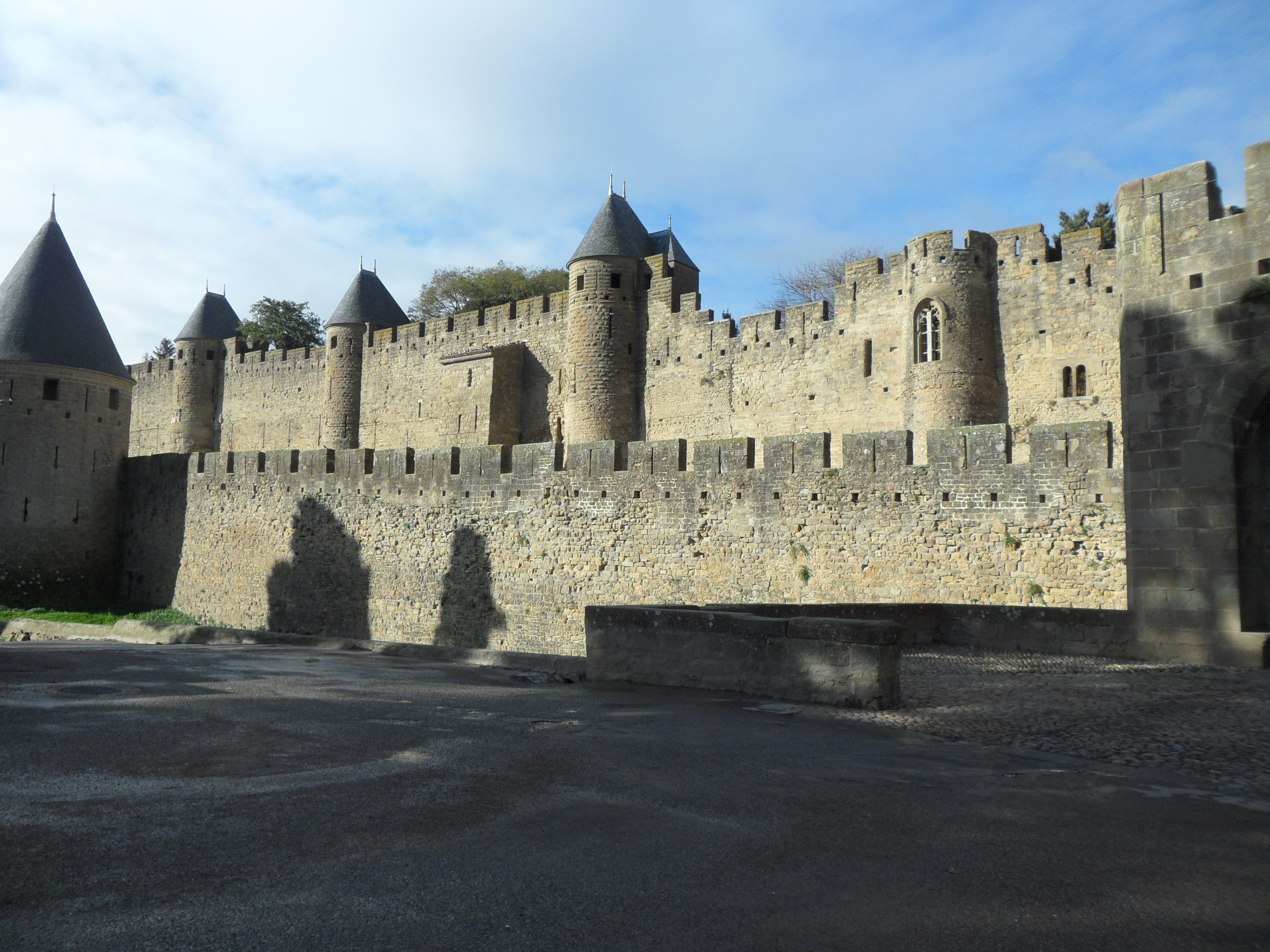 Carcassonne medieval castle, France is situated in the Aude, Languedoc-Roussillon Region, also known as Occitanie. When I moved to the south of France a few years ago it was one of the first places I visited. I had moved to a village near Carcassonne city and it was the main highlight of the area. It is a UNESCO World Heritage site and more than just a castle, it is a fortified medieval town dating back 2,500 years.

The name of the castle comes after Lady Carcassonne (Dame Carcas), the wife of the last Moor king Ballak who was left to defend the castle after his demise at the hands of Emperor Charlemagne. The Emperors Carolingian army had formed a blockade around the castle walls and had been resting in wait to attack for several months. She cleverly tricked them into thinking they had enough food to last them a long time, by feeding a pig well with grain and then throwing it over the wall in front of them. When the pig hit the ground it then burst open and they saw the belly full of grain. The army fell for the trick and figured they had enough supplies to last them months. They subsequently gave up their plan to starve them out and left. Soon after, she signaled the trumpets (sonner les trompettes) and made peace with the Carolingians, as she knew it was only a matter of time before they returned. The word ‘sonne’ is said to have been added to her name, hence the name Carcassonne was born.

Famously known as Carcassonne medieval castle, the name of the castle is actually La Cité. This is French for The City. It is a massive structure with 53 towers joined together by enormous walls and a moat. It is known as the worlds largest medieval theme park and there is a town inside the walls where people still live. There are lots of interesting shops, restaurants, pubs and even a speciality restaurant selling Carcassonne’s famous Cassoulet. There are plenty of creperies, ice cream bars and speciality nougat stores. The nougat shops give free tasters! You do need to ask rather than just delve in though. I made that mistake! (cringe). There are medieval themed activities to entertain the whole family.

It is open day and night and it could be very romantic to have a nice evening dinner among the ramparts. Day time will no doubt be a lot busier but if you come to see all the shops and experience any of the tours then you are best to arrive during daylight hours. There are various tours such as the walking tours which bring you on a full tour where you access areas not available to the public without a ticket. It will give you a full history and show you the castle in all its splendour. There are also horse-drawn carts in a medieval style that are a great way to see the sights and take a step back in time. There is also a pretty little train that the kids will love as well as the adults. It is best to reserve the walking tours in advance if possible to avoid disappointment as they book up fast. The audio tour is available in various languages and is even free for Europeans under 26 so bring ID if that applies to you. The audio guide needs to be collected from the Tourist Office beforehand. The little train runs from May to the end of September and is also available with an audio guide in various languages. The horse drawn cart guide runs from May to November and is weather dependent.

It is not far from the main thoroughfare of Carcassonne city and you can walk or take a bus. If you drive there are plenty of car parks so you won’t be stuck but might still have a short walk, depending how busy it is. There are overflow car parks for the summer months through June to September.

There is a beautiful Romanesque church within the cité called Basilica Saints Nazarius and Celsus where you can also get a guided tour. It has amazing Romanesque architectural features including famous stained glass that are among the oldest remaining in France to this day. You will marvel at the interior with its vaulted ceilings, unusual romanesque architecture and entrance with five arches. There is sandstone flooring throughout. It is a hugely popular wedding spot where I was lucky to attend for the wedding of our friends from Carcassonne. The exterior has some cool gargoyles which were added during the Gothic revival. Check out the photos below. If you love architecture or photography you will be blown away.

It is all really enchanting and it reminds me of a Harry Potter movie. It has beautiful cobbled streets winding around little alleys which open up to new and different sights. The whole experience is quite magical. I would actually recommend going during off-peak season due to crowding. If you want to go when the weather is still nice and sunny then I recommend May or September and also to avail of all the guided tours. The winter months are ok but a lot of the shops and restaurants close down during the off peak season from October/November to May.

Rumour has it that the castle was the inspiration for Cinderella’s castle in the Disney movies. The points on the turrets of the towers were actually added during restoration and were never a part of the original structure. They do add a striking appeal. Another reason kids will love visiting the castle! It is one of the largest restoration projects in Europe. During the 19th Century the cité was on the verge of being demolished. They were in talks of turning it into a stone quarry. Luckily, they decided to go ahead with the restoration. From 1853 -1911 Viollet-le-Duc and his successor Paul Boeswillwald restored its medieval glory.

There is a 5 star hotel within the cité that has been voted best castle hotel in Europe. It is the Hotel de la Cité. It is incredibly romantic and luxurious with beautiful architecture and interiors. No expense spared! There are all the hallmarks of an outstanding 5 star experience with a top restaurant and spa with full concierge. It is worth trying their cocktails as it is open to the public so you don’t have to stay there to feel like royalty!

There are some cool things to see and do such as the Haunted House – like a ghost tour and the oldest pub in Carcassonne which often has live music, is medieval style and has a dungeon feature with chains in the corner for spooky effect. It’s called L’Ostal des Troubadors. The building is so old, it really feels like taking a step back in time. They are also very child friendly there and looked after us with our baby. We got comfy bench seats with cushions on and listened to some buskers singing. It was a proper old pub which are actually quite hard to find elsewhere.

If you decide to visit Carcassonne you simply have to visit the Carcassonne medieval castle. It is an absolute must-see attraction and although you will be able to see it from afar, the whole experience has to be seen to be believed. Granted, some may find it a bit touristy but you look past that when you are steeped in the idyllic history and surroundings. It is literally like taking a step back in time!

One piece of advice I do have is to go to the speciality place La Maison du Cassoulet for a decent cassoulet if you are after a good one. A lot of the restaurants are selling the canned version and fobbing it off as the real thing. You will need to book the restaurant in advance as it is another main attraction so book well in advance if you are keen to try a good cassoulet. I have made that mistake myself! There is also another fantastic restaurant not far from the cité where I tried a scrumptious homemade cassoulet and it even has a view of one of the old castle walls. It is called Histoire sans Faim, 15 Rue Des Trois Couronnes, 11000 Carcassonne Center.

Carcassonne is a brilliant place to visit and I will be following up with another blog post on the area soon. If you are keen to go for a short drive, do visit the nearby village of Montolieu. It is known as the “village des livre” ( village of books ) and is a charming little village with winding streets and pretty views. There are little bookshops and art galleries which make it special and there is a restaurant there well worth the 15 minute drive. It is called Casquette et Chapeau and they serve outstanding dishes at a great price. The chef has worked for numerous famous Michelin star chefs and the ambience is wonderful. Live music every weekend in summer outdoors. Check out their Facebook page here. Highly recommend it!

If you are looking for a good pub and awesome nightlife, go to The Celt. It is a cool Irish bar owned and ran by a lovely Irish lady called Susan. The craic is ninety there, as they say! It is definitely the best pub in Carcassonne and all the French go there too so that is a sure sign. Live music and lots of beers, whiskeys and just about any drink you want!

If its wine you are after you are in the right place in Carcassonne! There are lots of wineries to visit and some great wine tours. Wine is so cheap so you can afford the good stuff! The Occitanie region is becoming more popular than Bordeaux according to a recent publication in Elle magazine!

If you want to read more about the history of the medieval castle, check out this article.

All in all, Carcassonne is a great holiday destination for a city break. It doesn’t have the feel of a big city but more of a town with nice cobbled streets and plenty of boutiques for shopping and great food. Well the French are well known for the food and wine! There are some nice museums, walks and of course, the famous Canal du Midi

Carcassonne is the only city to have been awarded with 2 UNESCO World Heritage sites. The Canal du Midi and Carcassonne medieval castle. If I haven’t convinced you yet, you can hop on a Ryanair flight for as little as 30 euro return! See ya there!