The Catlins and Moeraki Boulders with Babies 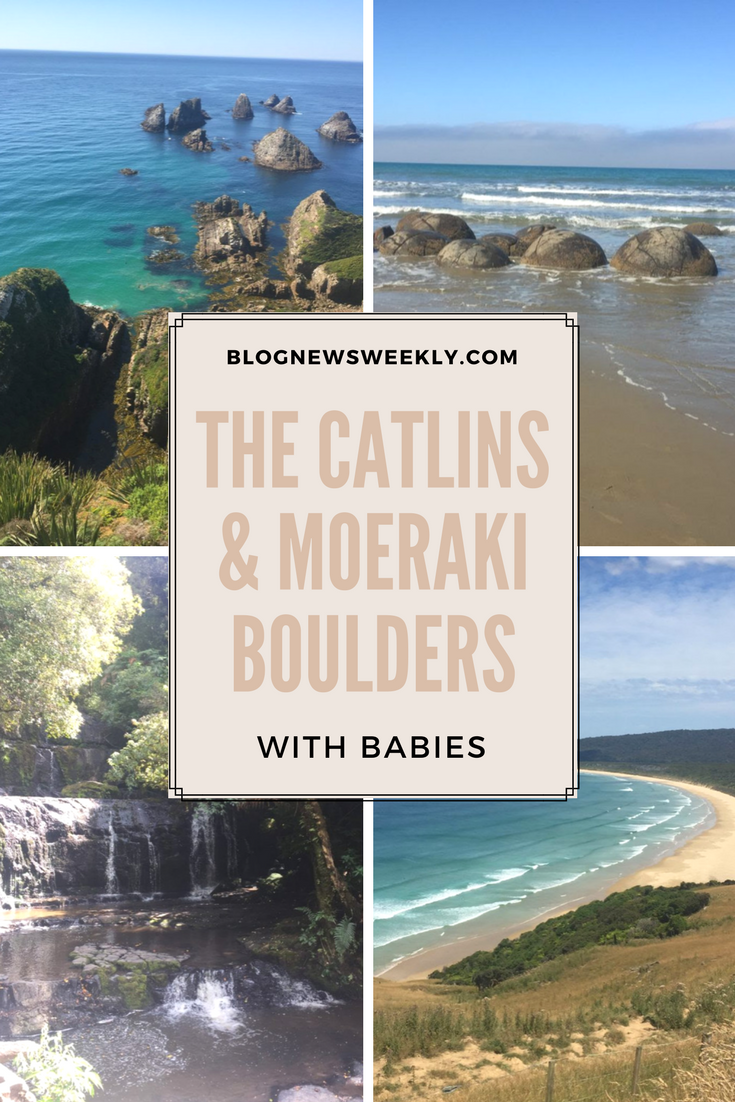 We decided to take a road trip to The Catlins and Moeraki boulders in New Zealand and it surpassed our expectations. We hadn’t heard a lot about either place but knew a couple of people who had been to the Catlins hiking an loved it. However, we have two babies aged 3 and 10 months and our 3 year old is extremely lazy haha! We knew we couldn’t go hiking, that was sure so we looked up the different trails and walks we could do that were considered ‘easy’. We still weren’t sure whether we could bring a pram but said we would bring the baby carrier in case and just hope for the best. Our 3 year old could walk a short distance at a push but we would probably end up carrying her so we looked at doing the shorter tracks and walks.

Luckily for us, the main highlights were easy tracks, walkable within 20 minutes to half an hour return so they were listed as our priorities. We didn’t want to plan it all out completely as we like to relax and take our time while being spontaneous. We just wanted to cross off any places where were not easily accessible with the kids so it was easier to list the ones we could manage.

I had seen some photos on Facebook a few years ago after some friends had been to visit the Moeraki boulders and I was amazed by the perfectly formed round shaped giant boulders in the sea. Something totally unique and other worldly. I made it my mission to go there some day so we decided to go that route to the Catlins and stop by Moeraki on the way. It is a short 10 minute walk along a beautiful beach and well worth it for the sheer vision that is The Moeraki Boulders!

Our 3 year old had a ball, literally! She adores the beach and had great fun climbing on the boulders and even posed for some photos. It is hard to get her to stay in the same spot normally so we got some really nice family photos. It was pretty busy there as there was a tour bus and quite a few camper vans so there were a lot of tourists but we were lucky the tide was still out at 5.30 as we weren’t sure if we would get there on time! As per usual we had been late leaving the house with our kids and running at least an hour and a half late.

Do check the tide times when you plan on visiting to avoid disappointment. You don’t wanna miss this! I advise bringing a baby carrier rather than a pram for the sand. We went to the bottom car park and were glad as it meant walking along the beach rather than down steps. There is a cafe at the higher point so it depends what you prefer but if carrying a baby it might be easier to walk the beach rather than the steps. Our 3 year old walked most of the way but we carried her a bit at the end.

We drove from there to Dunedin and were hoping to get accommodation there for the night since it was getting late around 7pm when we arrived. There was no accommodation in the whole of Dunedin city and the outskirts, we were so shocked! We hadn’t booked in advance as we figured it wouldn’t be too busy. Wrong! Unfortunately, the nearest accommodation we could find was a further hour and a half away. However, we discovered it was actually in the Catlins, so we would wake up there and have the full day to drive around and explore. Word to the wise – book your accommodation in advance if planning a stay in Dunedin in summer time.

We arrived in the Catlins and were blown away by the natural beauty and relaxed feeling. We really felt like we were on holidays at last and it was so serene! The kids were asleep in the car by then so we were able to really enjoy the scenery. Ah bliss, it is a little piece of heaven and we were delighted to discover it. It seems to be off the beaten track a bit, which really appealed to us. Not too many tourists and a very unspoilt coastline with a low population. Mainly farm land with the most stunning beaches that have white sand, huge gushing waves and best of all – quiet! I imagine surfers would be in paradise here. If you like escaping the hustle and bustle, you will love the place. A real retreat to unwind in.

We settled in to our hotel and it was fairly basic but it was cheap and it had everything we needed. We were glad to hear there was a bar up the road that were serving food late. Thankfully! We had been eating snacks all day and starving for substantial food. It was nearing 9pm so we ordered food and some beers and chilled there for an hour or so. We wanted to get back early enough as it had been a long day – 9hours drive from Akaroa. Yikes! We were brave, with kids in tow. The kids were great, we did our few stops along the way but we were all wrecked so off to bed we went. We would be glad to get up early and go sightseeing next day.

Checked out by 10am on the dot and headed off to the first place on our list. Nugget Point. We had seen a couple of photos online and it looked great, with a lighthouse at the peak and surrounded by nugget shaped rocks jutting out of the sea. The photos didn’t even do it justice. It was a beautiful coastal walk and only took around 10-15 minutes. We realized afterwards that we could have brought the pram as it wasn’t rugged terrain but we managed to take turns carrying our 3 year old. We had the baby in the carrier which was fine but it was very hot that day and the tiredness got the better of the other one! My advice is to bring a pram if it’s hot, since there are some slight uphills. I did spot another brave lady with a baby carrier and two small children walking alongside, but I guess it depends on the child. There was no information online about whether you could bring a pram but just a heads up for you!

After that we decided to just follow the road and then decided spontaneously to head to Purakauni Falls as we really wanted to see a waterfall there. There are a few but this was the only one with an easy level walk. It looked impressive and was only 20 minutes return so figured it was easy enough for us with the babies. We would chance bringing the pram this time but actually it was more out of necessity than anything. Our 3 year old had started whining and complaining so we knew she was tired after the last track. She also had a short nap in the car and wasn’t fully awake when we arrived and had to wake her. It was fine up until the end where there were some steps but I was able to manage with the pram oil nearly the end so it was ok. It was well worth going to and we got some great photos. It wasn’t too busy with tourists so that was a nice walk. It was shaded too so great to be sheltered by trees on the walk there from the heat. So hot that day!

We wanted to check out some nice beaches and hopefully some native wildlife as we had read up on the sea lions, yellow-eyed penguins, seals and endangered Hectors dolphins whose home is in the Catlins. We made our way to Curio Bay. There was a lot of gravel road on the way there which was a bit annoying but worth the drive. The scenery was beautiful and we passed some stunning white sand beaches along the way.

We got to Curio Bay and it was blowing a gale. We heard there was a storm brewing and so the beach wasn’t the best place to hang out that day. We noticed there was no accommodation in all the hotels except the backpacker hostel there so again I would advise booking in advance if planning a stay there. There seemed to be plenty of camping there so if you like that idea, it is well-equipped. We stopped at the cafe for lunch there and they had yummy wraps and cool mason jars for the kids drinks with stripy cardboard straws. There were kids activity bags available if you need some distractions too. The walkway to see the yellow-eyed penguins was right next to the cafe and only a short walk to the waterside where we were hoping to spot some seals. Unfortunately the wind was picking up and it was late afternoon so probably not the best time to go wildlife spotting.

We headed to Invercargill for the night, which was only an hour away so we were happy not to have to go far as it was getting late by then. All in all, we loved our trip away and vowed to go back next chance we get. If you are looking for unspoilt beauty and wilderness with lots of spectacular sights, walking, hiking and pristine beaches, you will be in the right place. Absolutely bring your whole family, it is suitable for all ages! No-one will want to miss it. Don’t forget to try a Speight’s beer, Southlands favorite. Expect to see lots of farmers in stubby shorts and gum boots as well as people wearing no shoes everywhere! A lot of places require leaving muddy boots at the door. As the Kiwi’s say ‘No shirt, no shoes, no problem!’ Gotta love NZ!

Affiliate link* : Grab a Lonely Planet Guide for accommodation and info depending on your preferences here >> BROWSE

*If you make a purchase through my site I make a small commission – it is no extra cost to you. Thanks!