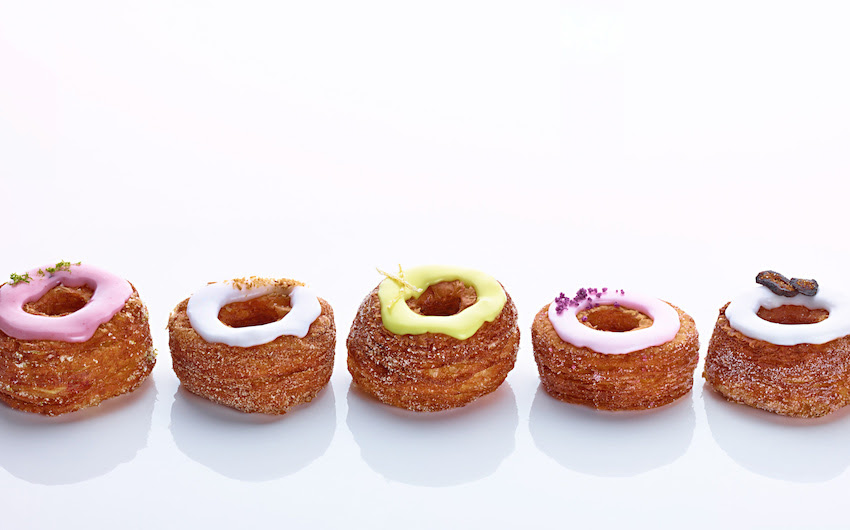 These pastries will have you waiting in line for almost an hour, rain or shine, flurries or blizzard, but they are worth the wait! Dominique Ansel Bakery is baking what some claim to be the world’s best pastries.

Photography and videos property of SVADORE

It was 15°F and my mom and I were alternating holding places in line. My toes were freezing off and the line outside of Dominique Ansel Bakery was moving at a glacial pace. But we refused to throw our towel in and turn around; we wanted to see what all the hype was about. Why do lines form outside this Bakery in the heart of Soho starting at 5AM, when the bakery itself opens at 8AM?

While waiting in line at Dominique Ansel Bakery…I didn’t think I would be coming here to order Madeleines. Especially since French Pastry Chef Dominique Ansel is the creator of the Cronut, the famous croissant-donut hybrid. But while waiting in line in the cold 15°F winter chill for over 20-minutes, one of Chef Ansel’s staff members came out with a basket of warm Madeleines and offered them to everyone waiting in line. I popped one in my mouth, not expecting much except the taste of a cold leftover Madeleine that had been sitting there since this morning. As I took a bite, I instantly knew…this 30-40 minute line was going to be worth the wait. The Madeleine had just been taken out fresh from the oven. I could taste the lightly powdered sugar and lemony zest in the buttery treat. It melted my insides filling my body with a split second of warmth. So we stood our ground and persisted for another 20-minutes until we finally made it into the bakery, where another 20-minute line awaited us (at least this time we were in the warmth!)

Step in and you are surrounded by a world of pure imagination. Any pastry your heart desires can be found in Dominique Ansel Bakery. Some of the most notable one’s include: the Cronut, the Magic Soufflé, Frozen S’more’s torched right in front of your eyes, warm and lemon zesty Madeleines baked for you personally the minute you order, an array of desserts and tarts that showcase various gastro art techniques in shapes of pine cones and polar bears, the DKA, and of course, his Instagram-worthy cookie shots and Blooming Hot Chocolate—the list goes on!

Seating is somewhat tight and limited at Dominique Ansel Bakery, but that’s also due to the crowds of people flooding the inside. Luckily, many prefer to take their pastries and hot chocolates to go rather than to stay. So a couple of tables were available both in the indoor/outdoor garden and in the bakery itself.

As we got closer to the cashier register, we finally began to see the line of pastries. It felt like I was on a conveyor belt at Disneyland watching all these creations being made in front of my eyes. As Madeleines were ordered, pétit Chefs would put them in the moldings and stick them in the oven in front of everyone, marshmallows were being torched and handed to customers within seconds, cookie shots were being poured and devoured by children and adults alike, and marshmallow blossoms were being placed on hot chocolates and observed by crowds everywhere.

We got to the cash register and realized that the Cronuts had been sold out since 12PM that day. Thinking I was missing out on Dominique Ansel Bakery’s primary attraction, I asked the woman behind the cashier register what the most sold and popular item was at the bakery. Contrary to popular belief, the Cronut is not Dominique Ansel Bakery’s most sold and popular pastry, but the DKA is. We ended up ordering 2 Blooming Hot Chocolates to go, a dozen Madeleines and a DKA.

For those of you who are not aware of the Blooming Hot Chocolate trend, Dominique Ansel Bakery has cleverly created marshmallows in the shape of blossoms with chocolate truffles hidden inside. As the marshmallow is placed on top of the steaming hot chocolate, it blooms to unveil a cluster of small chocolate truffles. It is this small, but adorable concept that has gone viral on social media. One guy went as far as hiding an engagement ring in one of marshmallows and proposing to his girlfriend as it blossomed! See below for 2 of my cute videos of my blossoming hot chocolate:

To be honest, I wasn’t expecting much from the hot chocolate, in fact I thought it would taste kind of pre-made. Having zero expectations when tasting something for the first-time is one of the best experiences. A gulp of my hot chocolate and I had to say it was on par with Jacques Torres. It was thick and heavy, the way hot chocolate is supposed to be! But beware; one cup is more than enough for 2 people. My mom and I both ordered one cup each and could not drink more than half of it because it is quite filling.

I waited patiently behind the counter and watched eagerly as my Madeleines were being made. I saw the pétit Chef take the dough, fill the shell-like moldings, and place it in the oven. 15-minutes later and my Madeleines were ready. Warm, fresh, and covered with powdered sugar. I brought my DKA and Madeleines to the table my mom had managed to snag and laid all of our goodies out in front of us.

Having already tasted the Madeleine, I dove head first into the DKA (the Dominique Kouign Amann). DKA is a croissant-type pastry, it can almost be considered Chef Ansel’s predecessor to the Cronut. The difference between the Cronut and the DKA, is that the DKA is a croissant with flaky layers of caramelized sugar. I know that the idea of caramelized sugar sounds super sweet, but I promise you, this crunchy on the outside, flaky on the inside treat is hardly sweet. It is moist with a hint of sugar here and there; it’s unlike anything I’ve ever tasted. Simply put, remarkable. And if it wasn’t so hard to purchase, I am sure I would substitute it for my morning croissant every morning! Chef Ansel himself has admitted to having one every morning since it’s concept in 2012.

Had I the stomach and the cash, I probably would have had one of everything: Cookie Shots, Soufflé, Frosted Marshmallows, Cronuts etc. That will have to be for another time. Maybe the line will be shorter next time, maybe it won’t be 15°F, whatever the case, I cannot wait to go back and taste more of Chef Ansel’s delicacies! This a MUST-VISIT place when in New York. Whether you live in the city or are here on vacation, a visit to Manhattan without stopping at Dominique Ansel’s Bakery, is like going to Paris and missing out on Ladurée, Odette, or La Pâtisserie des Rêves. For another one of my café pastry shop reviews in Chinatown, read on at Treat Yourself To A Sweet Moment In NYC.

Get insider travel tips and lifestyle content on the world’s most exceptional destinations, experiences and products directly to your inbox. Don’t miss out–sign up for travel blog SVADORE on the right hand side to stay up-to-date on where to go, what to do, what to see, where to stay, and where to eat around the globe.