New Cookery Programs to Watch out for this Autumn 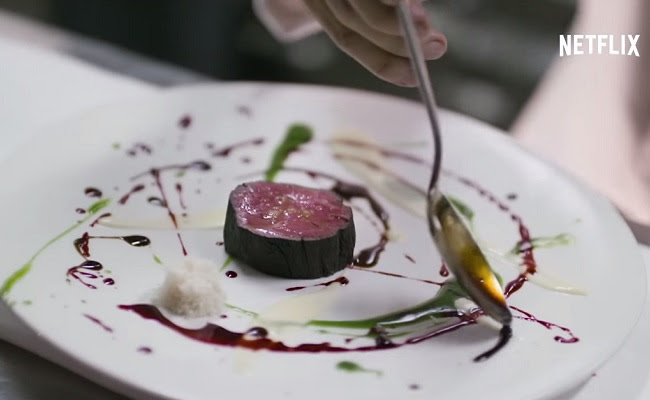 Netflix has excitingly announced that Chefs Table Season 5, an original Netflix series, will be launched on the 28th September. As if that wasn’t enough culinary delight, a fantastic new food series by the creators of Cooked, called SALT, FAT, ACID, HEAT will launch on the 19th of October. Really looking forward to having some new cookery programs to watch this Autumn! Here is the low down on both new cookery programs. If you enjoy culinary documentaries you will be in for a treat.

The famous Emmy-nominated series Chefs Table will follow four new international chefs and their lives. Get an inside look into the lives and kitchens of these renowned international chefs as the series explores their talents and passion from home to kitchen in this intriguing new season. They are culinary stars around the world who are redefining gourmet food and surprising us with their spectacular desserts. Their innovation and skill really take cooking to the next level which makes for addictive viewing.

For Season 5 of Chef’s Table, Netflix dig past the surface of the fine-dining world to reveal remarkable chefs and cuisines whose stories have for too long been hidden.

Cristina Martinez’s restaurant, South Philly Barbacoa, which she runs with her husband of five years, Ben Miller, was the biggest surprise on last year’s Bon Appetit Best New Restaurants list: it serves lamb tacos on homemade tortillas with a bowl of consommé, starting at 5am on the weekends. But Cristina Martinez’s mastery of barbacoa is second-to-none in the United States, and Martinez and Miller are using her platform to advocate for an issue near and dear to their hearts: immigration reform.

Martinez is an undocumented immigrant to the United States, and, having entered the country to escape her abusive ex-husband, she is unable to apply for a green card without returning to Mexico and remaining for 10 years. Martinez spent a year sleeping on couches and working 2-3 jobs at a time to send money back to her daughter, so that she could attend nursing school. She found her way to Philadelphia, where she put her mastery of barbacoa to work (the craft of barbacoa has been in her family for generations).

In 2012, she met Miller when the pair were working at a local restaurant. Martinez was fired after her immigration status was revealed, and to continue to support her daughter she and Miller began cooking together from their one-bedroom apartment. Over the past 4 years, she’s graduated from cooking from her home, to a food truck, to a brick and mortar restaurant, to the Top 10 Best New Restaurants in the country.

Now Miller and Martinez are focused on giving a voice to the nearly 25% of kitchen workers that are undocumented immigrants. They hope other chefs will join in their mission. As Miller says, if the best chefs in the world tell the truth about the people that make the restaurant industry run, the world might be quicker to change.

Now Miller and Martinez are focused on pressuring their fellow chefs to supporting the nearly 25% of kitchen workers that are undocumented immigrants. As Miller says, if the best chefs in the world tell the truth about the people that make the restaurant industry run, the world might be quicker to change.

Albert Adria is the man behind the curtain — one of the geniuses behind the ground-breaking, revolutionary, iconic El Bulli, …which was run by Albert’s older brother, the legendary chef Ferran Adria.

It was Albert who led the El Bulli Taller, a radical research and development test kitchen, which created the crazy techniques and dishes that set El Bulli apart from any other restaurant ever created. Among its famous creations was the spherified olive, a process of liquifying and reconstituting a Spanish olive, which became a milestone innovation in the world of avant-garde cuisine.

Since El Bulli’s closure, it has been Albert who has stepped into the spotlight, with his tapas bar Tickets, a restaurant that combines whimsical Spanish circus traditions with a joyful celebration of Catalan vermouth culture.

Now, as Albert prepares to launch his final hi-end restaurant project, an ambitious reinvention of the tasting menu experience titled Enigma, the world is beginning to take notice of a younger brother often forgotten.

This is the story of one of the greatest chefs in the world who has simultaneously succeeded beyond anyone’s expectations, yet remains in the shadow of the man who many think is the greatest chef of all time: his brother.

Musa Dağdeviren is not a fine dining chef — he is a chef of the people, a historian, and a cultural ambassador. For him, his restaurants are simultaneously an ‘ethnographic museum’ and a ‘garden of lost cultures and forgotten tastes’ — that is to say, both nourishing and delicious as well as informative and important to retaining a sense of Turkey’s individuality. He wants to, through his cuisine, break through the ethnic, nationalist, religious, and political divisions in Turkey.

Musa’s connection to food is deep and intense — he started working in an Uncle’s bakery at age 5, and, after his father passed away suddenly when Musa was 12, he began working full time in restaurants to support his family. His mother’s food became the touchstone for him, and it was her dishes that made him begin to think about what Turkey as a country was losing with the passing of older generations.

After a long period of apprenticeship (in Turkey you spend 6 years as a dishwasher and after that period of time, either graduate to cooking or stay a dishwasher forever), he opened his first restaurant in 1987. Right away he began using his restaurant as a way to bring the home cooking of the entire country into the restaurant dining scene (crossing the boundaries between home and restaurant food is rare in Turkey).

Now Musa travels all over Turkey working with local elders and to keep alive old traditions and recipes, saving them for the future — as Turkey’s restaurant culture has turned to Europe and the modern world, many of the defining local specialties have disappeared. As Musa himself says, you must save history before it needs reviving… at that point, it’s already lost. Musa is about bringing people of different backgrounds together to celebrate the shared history of Turkey’s (and the wider region’s) incredible but endangered food culture. Rather than trying to reinvent his food culture, like so many modern chefs are doing around the world, Musa is focused on trying to document that food culture while he still can, while there are still people alive who remember it.

Bo Songvisava is doing something radically different with her Thai cuisine at Bo.lan in Bangkok — she’s devoted to slow food, the organic movement that’s famous across Europe and America that focuses on quality and indigenous ingredients over high-yield industrial crops and genetically altered crops. Songvisava is helping lead the charge towards sustainable and ethical farming in Thailand, along the way discovering indigenous vegetables and herbs that have fallen out of favor for use in restaurant cuisine — in that sense, she is rediscovering Thai cuisine itself.

Songvisava’s personal story is as interesting as her cuisine — she travelled abroad from Thailand to London to work under British chef and Thai cuisine master David Thompson at his restaurant Nahm, where she met her future husband, Dylan Jones, an Australian. She and Dylan fell in love and moved back to Bangkok together where they teamed up to open their dream restaurant, Bo.lan.  It’s rare in Asia for a female chef to be so outspoken, but Songvisava considers it her duty to try to change the perception of Thai food worldwide – it’s not just pad thai and sticky rice. Songvisava has sprung unto the worldwide stage recently as she was named the Best Female Chef in Asia in 2013 and Bo.Lan became known as one of the best restaurants in the world.

Salt, Fat, Acid, Heat is an essential guide to the basic elements of good cooking. The Netflix series is based on Samin Nosrat’s best-selling, James Beard Award-winning book, named Salt, Fat, Acid, Heat. Nosrat is an American chef and food writer. She is a regular food columnist for The New York Times Magazine. Her parents immigrated from Iran in 1976 when she was 5 years old. She grew up eating mostly Iranian cuisine, although she didn’t learn to cook until she was an adult.

Directed by Caroline Suh, each episode of this four-part series joins Samin Nosrat as she travels to home kitchens of Italy, the southern islands of Japan, the heat of the Yucatán and back to Berkeley’s Chez Panisse, where she started her culinary career. She wants to demystify and explore the central principles of what makes food delicious for everyone and how each of us can easily incorporate those elements into every dish. Salt, Fat, Acid, Heat is produced by Jigsaw Productions, the creators of Cooked. Get a feel for her cooking style and what to expect from the documentary by checking out this video –

Will you be tuning in to watch these new cookery programs to watch this Autumn? I know I will!

If you liked this, you may also be interested in this