Unhealthy Food Cravings and How to Stop Them 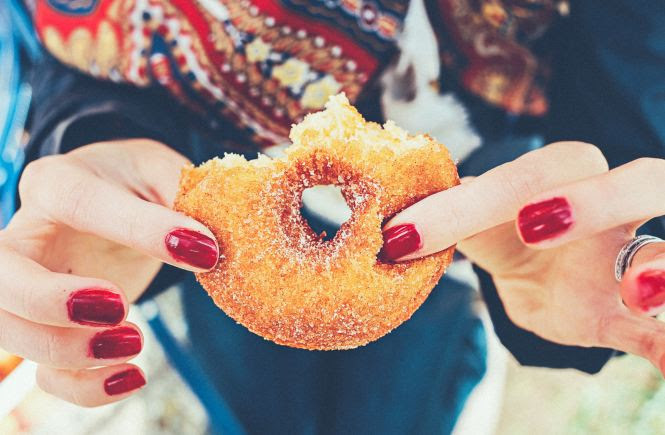 By Cool Things I Love

Today I am talking about unhealthy food cravings and how to stop them. Most of us are partial to a sweet tooth or junk food and drinks craving but there is a scientific reason behind it. Fatty and sugary foods spark a reaction in our brains. When we satisfy a craving by eating a sweet treat, there is a biochemical change in our brains.

As a survival mechanism built in through evolution, our bodies have developed so that we are drawn to fattier foods. When the body is hungry, we will crave the foods that will provide us with a fuller feeling. Cravings on the other hand, are linked to the brains reward system. We feel satisfied and rewarded while eating fatty and sugary foods.

Like a drug, the cravings are established and the brain associates that craving with a feeling of satisfaction and reward when we give in to those cravings. This feeling is addictive and therefore like a drug.

The more sugary and fatty food we eat, the more we crave. Just like a drug addiction, we need to remove that craving in order to make it no longer addictive. Here is an example, I used to be literally addicted to Coca Cola and had to have a bottle each day without fail. I would crave it in the morning on my way to school and always had enough change to buy one at the bus stop. I read somewhere that if you drank one bottle of coke a day for a year that you would put on a stone (6.35kg) in weight. This scared me into stopping.

However, the cravings were too strong so I decided to try the diet version instead. Diet Coke had a lemon flavor added at the time and although I didn’t normally like the taste of plain Diet Coke, I opted for the lemon one. Within a few days I was completely addicted to the Diet Coke with lemon and was drinking 2 bottles of it a day!

I couldn’t believe how strong my cravings for it were, within only a short space of time. I was gasping for a Diet Coke in the morning before school and as soon as I finished my day too. I kept reassuring myself it was ok since I wasn’t going to put on weight with the low calorie option but it was costing me at least 5quid a day! Back then, I wasn’t aware of the dangers of Coke but I had to give up anyway as it was costing me too much. Luckily I managed to wean myself off it cold turkey (with difficulty) and now I can’t stand it again, so it just shows how addictive it really is. Worrying.

Diet Coke contains caffeine and aspartame. Aspartame is an artificial sweetener that is 200 times sweeter than sugar. Although approved by the FDA, there are a number of concerns associated with it. Here is an article and video with some cause for concern – Aspartame

As you can see, it can cause addiction within 40 minutes by creating a short addictive high similar to cocaine. It can also trigger insulin which sends your body into fat storing mode, like other sugary and fatty products. Diet Coke is hardly a good diet substitute. It kills brain cells, can cause a formaldehyde buildup and also cognitive problems. In fact, pilots are not allowed to drink it for this reason.

The toxicity of aspartame is debated regularly by manufacturers as there is simply too much money to be lost. Sadly, corporate greed wins over human health again. Tests were demanded but actually those tests were allowed to be funded independently by those exact corporations and therefore branded as mere scaremongering.

The producers of food additives using addictive ingredients find and pay for studies that work in their favor and then send them off to the FDA for approval. One example is the use of fructose syrup instead of sugar. Brands were then able to market their products as ‘sugar free’ when in actual fact fructose is way more addictive than sugar. Here is an article and video outlining the dangers and effects on the body – Fructose

Brands often market their products as ‘zero fat’, ‘no fat’, ‘no sugar’, ‘fat free’ and ‘light’. The marketing ploys are to sell more products by luring in vulnerable customers trying to lose weight. Fat being the enemy. Often products labelled ‘fat free’ are full of sugar and vice versa. Sugar basically turns to fat so it is a ruse to lull consumers into a false sense of security.

Hydrogenated fats are the worst. I remember when I was a child, margarine was being advertised as a way healthier alternative to butter and we were being warned against ‘fatty’ butter. Trans fats from hydrogenated oils were having a worse effect on the body, therefore unhealthier. Nowadays, margarine is much healthier of course, but in those days it wasn’t. Just goes to show how powerful the media and marketing really are.

I always make a point of choosing foods that are of natural origin over something made with unnatural and highly concentrated ingredients. I steer away from processed foods and anything that sounds like it was made in a lab. A rule of thumb.

Marketing images often depict images of happiness, association with a great lifestyle, beautiful people with fantastic physique and an enviable life. As if to say if you eat or drink this, you will be that person and have that lifestyle. It tricks your brain into associating happiness with those products.

It is the same how they market the breakfast cereals to kids by using popular Disney images and free toys. Always full of sugar or artificial sweeteners. To keep them coming back of course. Just as they put all the chocolate bars and lollies at the counter where they are unavoidable as you wait.

Obesity is on the rise, with 68% of adult Americans are obese. The average American eats a shocking 22 teaspoons of sugar a day. This is likely due to the growing range of fast foods, frozen ready meals, sugary and fatty foods being marketed towards them daily. When we eat fatty and sugary foods, endorphins are released and we feel good. But that feeling is short-lived and we soon start craving again. It is a vicious circle and indeed an addiction.

Jamie Oliver springs to mind. I watched his documentary tackling obesity in America. He went to school canteens in the areas with the highest obesity problems and actually cried when he realized they were eating only processed fatty and sugar filled foods. They had no other options. Some didn’t even know what a vegetable was. Here is a video by Jamie for TED Talks –

Change is needed. We need to teach people about healthy eating, especially the younger generation who often rely on fast foods and are not being educated on the correct foods, the dangers of processed foods and how we maintain healthy diets.

Vegetables have everything we need to stay healthy. If you dislike the taste of vegetables, why not try juicing? It is a great way to guarantee the nutrients from the vegetables as they absorb into your system quickly and are digested well. They can be mixed in with fruits and the taste is less apparent. Giving up processed, fatty and sugary food is the way forward. Cutting down, at least to a minimum is required in order to beat the cravings.

Over time, the taste of vegetables and fruit becomes the new normal and those sugary and fatty food cravings become less appealing. You will find yourself craving the healthier nutritious food instead. Our bodies will crave the better foods once it adapts to having more of these.

Think greens and colorful fruit and veg. As the saying goes ‘eat the rainbow’. Spirulina and chlorella are great supplements to take also. Your skin hair and nails will become healthier, resulting in clear skin, strong hair and nails and shiny fuller hair.

Look after your gut, it is extremely important as you will know if you read my recent article here

Substitute organic honey as a sweetener instead of sugar

Help teach others and influence our younger generation by example

Try hypnosis if you are having difficulty, it trains your mind to subconsciously avoid craving triggers

I hope these tips are useful for you and if you have any questions or tips, feel free to comment and let me know.

If you are interested in learning more about plant based diets, check out this article

Read more about healthy eating and diet on coolthingsilove.com
If you like this, you may also be interested in this